LaunchReady UI was my first attempt to build a sellable product on the side. It was a great experience that included everything from market research, company formation, and refining a sales pitch through some interesting technical and usability challenges.

I worked on this project on nights and weekends from April 2017 through November, coming in at around 300 hours and around $1,400 to build a production ready product, advertising, documentation and initial content, hosting and delivery automation on 4 platforms, and associated legal activities for the formation and service agreement.

Excerpt from Meet LaunchReady UI: A SaaS Product That Almost Was

Meet LaunchReady UI, a UI Automation service designed to help fast growing SaaS companies build a broader safety net even while they’re focused on scaling and teach new team members how to add on to the software. 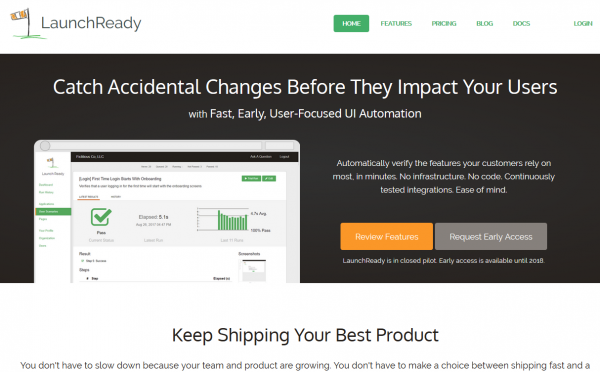 A Marketing Site, with CTAs and a touch of exclusivity and FOMO

(Ignore screenshots with a space in the name, they’re stale

From May 2017 to October 2017, I logged 10-20 hours/week of spare time on building a company around this idea, from market studies and financial planning to documentation, company formation, and product development.

UI Automation testing is widely known to be fragile, complex, and time consuming. LaunchReady UI’s goal was to challenge all of these, for a narrow context, providing a service to support companies getting 80% of the value at no more than 5 minutes of additional delay on their build processes.

I wrote a small series of blog posts specifically about LaunchReady UI:

And a number of background tech posts:

LaunchReady UI was hosted in Azure and composed of a front-end API, back-end test agents, and the marketing site.

The front-end and API was hosted on Azure App Services, with Application Insights wired in for traffic analysis, monitoring, and visibility.

The frontend uses KnockoutJS for view binding, RequireJS for modules, Zousan for promises, D3.js for charting, Moment.js for dates, LESS, and a few other odds and ends. The build process uses gulp and eslint.

Only a small number of unit tests were used on the back-end, mostly focused on ensuring endpoints had defined security. Error handling send every unhandled exception through email to a dedicated email account.

The test agents ran in Service Fabric clusters, polling the API above to ask for work and execute tests.

These were written in C# on .Net 4.6, using Selenium to execute tests written in a custom grammar and following the PageObject pattern. Initially tests ran against PhantomJS 2, but I was testing Headless Chrome locally for rollout.

Error handling was reported via the API, there were no incoming ports, and all intra-service communications relied on HMAC headers and shared keys. Diagnostics data was shipped to Librato.

The marketing site was static generated via the metalsmith nodejs package, covered in this post: Creating a Static-Generated Marketing Site

There were sample API clients written in Powershell and nodejs, used 3 times/day to run automated test runs against a nodejs sample site.

Example posts walked through deployment of a small node.js application to Azure App Service and Heroku, using build services such as TeamCity, CircleCI, and TravisCI.

The delivery pipeline for the API and Agents was managed by TeamCity and included deployment to a local set of VMs for testing, and automated delivery to Service Fabric and Azure App Service, including automatically applying changes to the database. A full production push took less than 15 minutes from pushing to git to reaching production and rolling out updated agents.