Deploying to ServiceFabric from TeamCity

Recently I’ve been working on an application that runs partially in Azure ServiceFabric. I’ve created a local cluster to work against and now it’s time to configure my TeamCity deployment to deploy upgrades to my application automatically.

In the previous post I walked through the setup of a Service Fabric cluster on a local Hyper-V server and 3 VMs, followed by publishing a Service Fabric service manually to the cluster. In this post, I’m evolving from the manual publish step to a TeamCity automated deployment.

Here are the system details:

This solution has two deliverables: a front-end API that is deployed to Azure Web Site (now App Service) and a back-end agent intended to run in Service Fabric. I’ve already setup a Continuous Integration step to build the projects, run the database migration, perform front-end gulp tasks, and verify a set of unit and integration tests, so I should have most of the dependencies I need.

I installed VS 2017 because historically I’ve run into issues with Azure projects (and MVC before that, and parts of WebForms before that). I originally was opposed to have the IDE installed on the build server, but have since decided I don’t mind and look at it as building with the same toolset on the build server that I built and tested with locally.

This is also the place I ran into the madness that is the current mess of NuGet and C# Projects.

This is my “good enough for now” setup. If I run into versioning issues, I can come back and add some backwards compatibility tests between the packages after CI and run the deployments serially instead of in parallel. 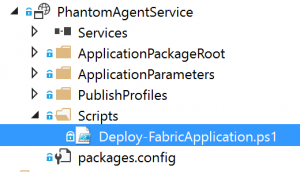 The Service Fabric package is created with a Deploy-FabricApplication.ps1 script that we’ll use to deploy the package once it’s built.

The first step is testing the script locally to make sure I know how to use it.

I had to do this several times, so I also got to learn how to update versions:

So now we have a working command locally, now we just have to get TeamCity to update versions appropriately and run this.

Building the package is straightforward. We just need to build the package in release mode, then configure Archiving to capture the bin/Release folder and PublishProfiles folder.

The Build Step in my “Package Stage” configuration looks like this: 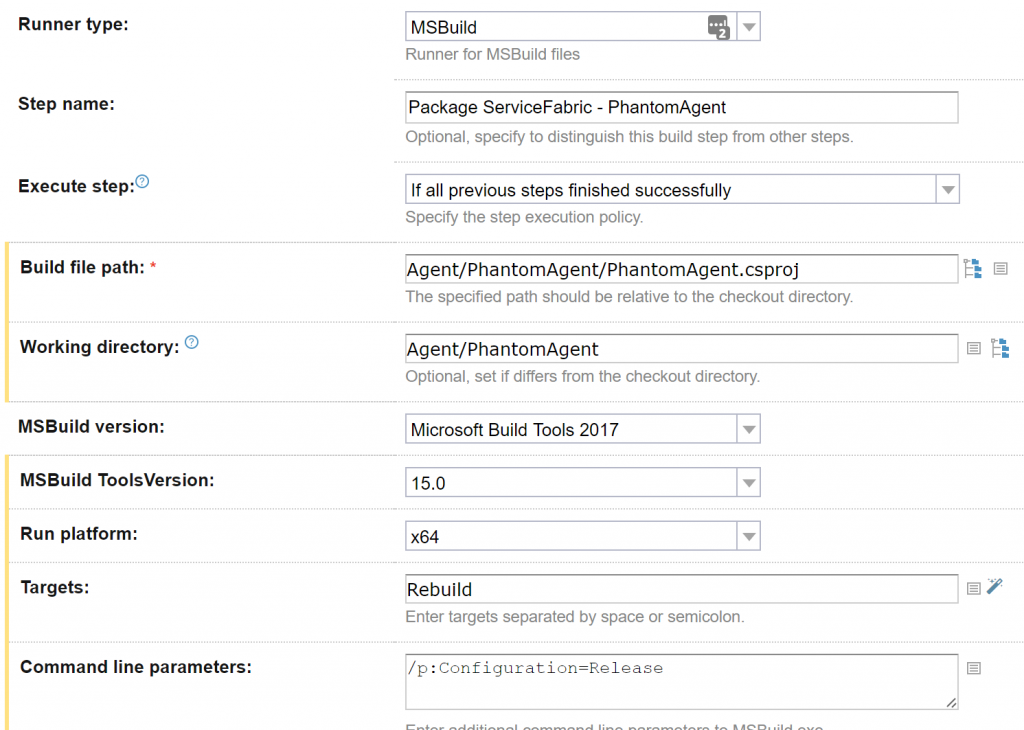 Once I have the package built, I am going to replace the versions with a value that ties to the TeamCity version number.

In the “General” tab in TeamCity, I use the build number token from my CI step as the version for this step:

My CI step has this for it’s build number:

So now I will have a matching 1.X.0 value all the way from CI through to the ServiceFabric manager.

Then in a new build step, I replace the versions in my two manifest files with the build version token from TeamCity:

Finally, I add entries to the “Artifact Paths” back in the “General” tab to zip up the package for use by the next step:

Running the build, I can verify everything is successful by opening up the archived package:

Now that I have a step building the files I need, I’ll add a new Build Configuration named “Deploy to Service Fabric”. I’ll set Snapshot and Artifact Dependencies to the prior Build Configuration and update the Build Number to use the value from that config (which is in turn using the one from CI).

I have one build step, a powershell command that matches the manual one I was running earlier that is set to treat powershell errors as errors (instead of the default, warnings). I run this as a single PowerShell source script so I can use dot notation (ServiceFabric scripts make some assumptions about having the connection variable available):

My build step then runs this command like so:

Note 1: Make sure your Server certificate is installed and permission granted to the user that TeamCity runs under.

Note 2: I also had to alter my LocalCluster.xml profile to StoreLocation="LocalMachine" instead of StoreLocation="CurrentUser", since that I where I installed the certificate.

And there we have it:

We can see matching versions in both places (1.43.0), so we know the pipeline is functioning.