Saturday started off cold and rainy, but it didn't matter because, for over 100 of us, there were more important things going on. Namely sessions ranging from the one I presented, Unit Testing, to specific C#, jQuery, database, ALM, Silverlight, Ruby, and Python topics. In fact there were so many specific topics and I heard so many good things about all of the sessions that I wish I could have twinned or tripled myself to attend them all. 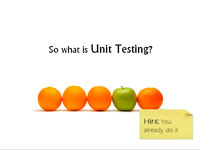 My session was the first one in the craftsmanship series and it was a lot of fun. I purposefully left 15 minutes at the end so we could talk more to peoples specific environments and challenges and I like to think at least one person in my session will be trying some unit testing next week. The slides and notes handout are posted on my site (the handout is enough for a quick overview).

The next session was an excellent ALM session from Steve Andrews (blog|twitter). Steve's session covered a big picture view of selecting a strategy for branching and merging, some of the advances ALM has made with 2010, and some of the things build definitions are able to do right out of the box. He did an excellent job of providing a base of knowledge to attach all those little tidbits I'd picked up on my own.

After lunch, and a book raffle, I attended Mike O'Brien's (blog|twitter) F# session, finally catching up a little on an item that has been sitting on my "find out more" list for a while. Mike exceeded my expectations for the session, not just showing us the language but really diving into what makes the functional paradigm different from the imperative. Coming out of his session I can tell I'll be using F# in the near future, both to continue expanding my use of Functional languages and to have that skill (and mindset) available when using Functional constructs in .Net.

Rob Rowe (twitter) led a session on generating Data Assemblies using Iron Ruby. Frankly I didn't know what to expect going into his session, as Ruby has never made it high enough on my "to learn" list to know what I was walking into. Rob's session used Ruby, but the bigger focus was on data assembly generation. From a few scripts he was able to generate both IL and CodeDom-generated code to build an entire data model layer of an application. A few more clicks and he had an MVC front-end. The walk-through of his process opened up a lot of new subjects for me (IL generation, CodeDom, Ruby) and I'm starting to think I need a real "to learn" list to keep it all straight.

Chris Eargle (blog|twitter) did a last minute session on C# Ninjitsu, straining our brains and walking us through some interesting aspects of the C# language. Chris did the entire presentation on the fly, as his office suite had expired that morning. His session was a good choice for the last one of the day, as he kept it lively and flowed smoothly from one interesting construct to another.

The day ended with a raffle from the sponsors who made this event possible. I walked away with an enterprise suite of software from DevExpress (which I'm not planning on sharing, but may end up in a blog or two). Over the course of the day I got to meet a lot of fantastic people, had a lot of fun presenting on Unit Testing, and overall just had a blast. I'm looking forward to the next one and, if your in the Raleigh area, I hope to see you out at the User Group meetings.