I'm in the air flying back from SQL Saturday 28 and wanted to capture my thoughts while the event was still fresh. Overall I would have to rate it as a resounding success. Last year the event attracted 200 professionals from Baton Rouge and the surrounding area, this year attendance doubled to 400, with additional interest from about 200 more that weren't able to make it. 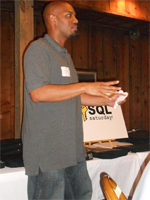 The event featured 8 tracks, including SQL and .Net sessions. Several early-bird sessions kicked off around 7:30AM - I have to applaud those brave enough to speak in front of a crowd that early, as I was still getting appropriately caffeinated. In addition, INETA made it possible for Keith Elder (blog|twitter) to provide a full day's ".Net From Scratch" training session. Steve Jones (blog|twitter) delivered the keynote, starting the day off with commentary on professional development, technical skill, and the importance of enjoying our jobs and finding balance in life.

The dinner the night before was in a large enough venue that we were able to mingle and talk a good bit before the dinner appeared, and the food was both good and plentiful (which worked out well for those of us who had been eating airport fare). Patrick LeBlanc (blog|twitter) provided our mid-evening entertainment, welcoming everyone to the area and introducing us to the team that had worked so hard to put the event together. Somehow I managed to end up at the Sparkhound table, but they're a friendly group and it made for a fun dinner. 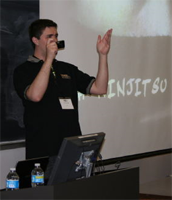 The event took place at LSU in a lecture hall, which meant we had classrooms with integrated power and overheads, simplifying some of the setup. A full size classroom was set aside for the speakers and featured plenty of space for us to get off our feet, plug in, or just get a snack throughout the day.

My session was right after lunch (see the Conceptual Data Modeling post from last week). Despite speaking with no code examples in an after lunch session, I still managed to draw a number of inquisitive people. Despite ending a few minutes early, we still managed to almost run over due to the great conversation we had at the end. Thomas LeBlanc (blog|twitter) presented on normalization and data modeling after my session and I stuck around to watch his presentation as well, picking up some ideas for the next version of my presentation.

Of the three SQL Saturday events I attended this year, this one was probably the best represented on twitter during the day. William Assaf (blog|twitter) kept the media flowing, constantly uploading pictures and commentary throughout the day and keeping the @SQLSatBR account busy.

As is always the case with the events, the best part was the people. I met a number of new people, at varying places in their respective careers, and had interesting conversations that lasted until the restaurant hosting the after party finally asked the last four of us to leave. I wasn't able to work everyone's names into the post, but it was a great group and there a lot of names both familiar and new. From what I hear, the planning for next year is already in progress, so maybe I'll see you there.

For more pictures, check out William's full gallery on Picasa.

And the slide decks for my session are posted now.