It's been a few days since SQL Saturday 46 and I have finally found some time to jot down my recap. This was the first Raleigh SQL Saturday and it lived up to all of my expectations. 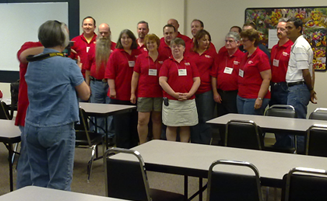 The excellent group of volunteers
that pulled it all together

There were 6 tracks of events, which were balanced more towards the BI and SSIS side of things than the previous events I've attended. Registration was hiccup free (though I was early and missed the rush), rooms were all located in close proximity to one another, and the lunch room flowed pretty quickly despite an early line. The signs and schedule were excellent, with 8.5x11 placards posted for all of the sessions on each room's door as well as large grids posted on the wall in two locations, displaying the whole schedule. Once I figured out the room numbering, it was easy to locate the sessions or speakers I was interested in. The event was organized by members of TriPASS, the local SQL Server User Group in Raleigh, and I'm looking forward to getting involved with the next one they put together. If I had to pick one element of the event that characterized it the most, that element would be how smoothly the execution went.

Grant Fritchey getting
started on his session

I started my morning off with Geoff Hiten's (blog | twitter) "Clustering for Mere Mortals" session, which gave me enough basic knowledge that there may be a clustering blog article in the near future. Geoff did an excellent job of communicating a complex task to his audience, balancing just enough background knowledge, direct examples, and good practices from his own experience.

I expanded my CDC knowledge in Chris Skorlinski's (blog) first session, but unfortunately wasn't able to make his SSIS + CDC session later in the afternoon (the disadvantage to being in my home town, had to run home to feed the cats). He provided an excellent overview of how CDC works, how to interact with it, and some of the internals behind the magic.

After lunch, I attended Grant Fritchey's (blog | twitter) "Identifying and Fixing Performance Problems using" presentation and had a blast (I'm using the SQL Saturday site-ized version of his presentation name). Despite some demo issues, Grant managed to balance delivery of his presentation with good audience feedback, even taking a 2 minute break in the middle to get everyone up on their feet and fight the post-lunch effects.

After Grant's session I caught Andy Leonard's (blog | twitter) "SSIS Design Patterns" session. I was completely out of my depth here, being far more of a beginner in SSIS (it doesn't get much more beginner), but I was still able to take away quite a bit of information from the session, including some ideas I will likely try to put into practice in an upcoming project.

I managed to run into quite a few of the local members of the user group, who did an excellent job preparing and executing this event. It seemed Janice Lee (blog | twitter) and I were constantly running into each other just long enough to share how great our last session was before heading off to two more completely different ones. It was one of these between-session breaks where I got to meet Eric Humphrey (blog | twitter) for the first time, another familiar face from the SQL community on twitter. There were many others I met along the way and at least as many people that I intended to meet but missed (or who snuck out early).

The day ended on a high note, around a table with Grant, Allen White (blog|twitter), Brent Kremer, and David Elvikis. Stories were traded, good food was eaten (not counting the fried pickles that showed up), and I think we all had a fun time. It was great to find out that Grant and Allen were just two more normal (well, close to normal) people like the rest of us. Somehow I managed to leave owing a round. So the next time we end up at the same event Grant, don't be surprised if a drink shows up 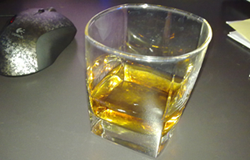 Unfortunately I fell down on the job where pictures and tweets were concerned, so there aren't as many as there have been for past events.

SQL Saturday 46 was an excellent event and ultimately both a lot of fun and a lot of information, what I have grown to expect from SQL Saturday events. The sessions were great, the event went smoothly, and the networking with the local and greater community was everything I had hoped for. I'm already looking for to my next one.