Working with Service Fabric and want a local cluster to test and develop against? Here’s the step-by-step path I took from a set of fresh Windows VMs to a running, secured Service Fabric cluster using self-signed X509 certificates. There are a number of Microsoft docs that cover this subject, this is a single beginning-to-end path that also includes fixes for gaps or errors in those docs as I went.

Here are the technical details:

Starting on SFNode0, I download the package. There is a brief struggle through the overly strict IE security settings (did you know docs.microsoft.com uses google-analytics?).

Unpack the downloaded archive and make a copy of the ClusterConfig.X509.MultiMachine.json so we can modify a copy without changing the original. I’ve named this “ClusterConfig.LaunchReady.LocalCluster.json” for my cluster.

The configuration (or “manifest”) is explained in detail in Microsoft Docs. I’ll call out the specifics of what I’m changing as I go. 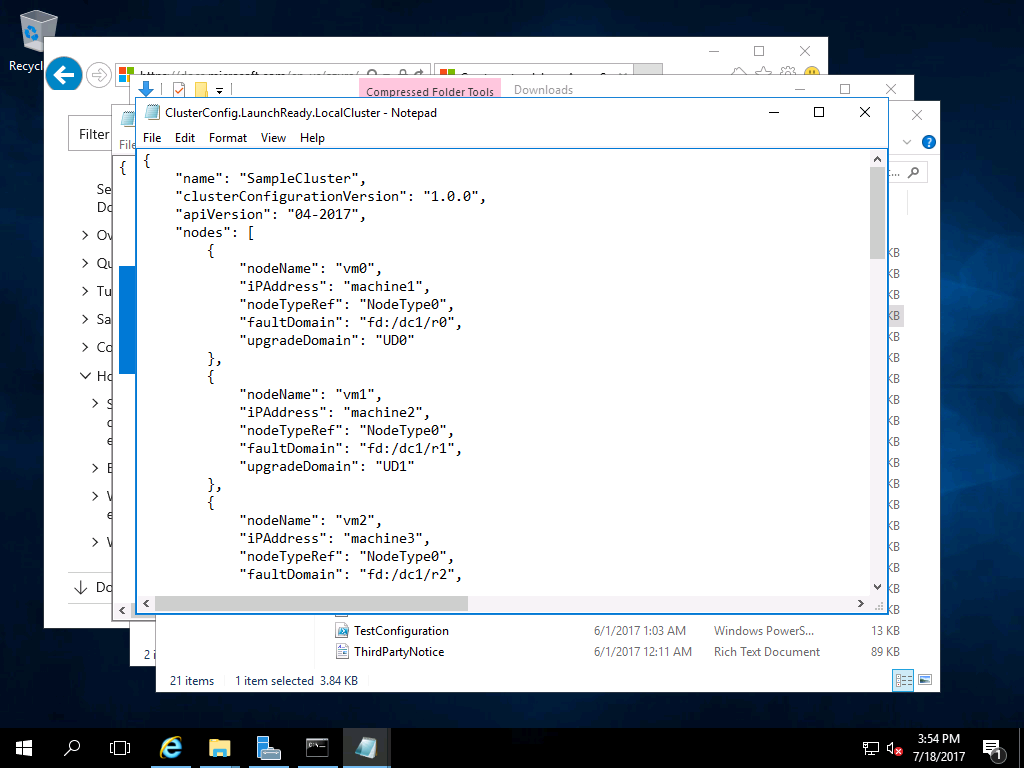 The first update is the name of the cluster:

The next section is the node definitions. I’ve updated these to reflect the names of my VMs, a common fault domain to indicate the shared server they are running on, and a common update domain (it woul dbe better to make these different, I wasn’t thinking when I first created this).

Here’s a break down of the properties:

I am going to skip over the diagnosticsStore section for now, as the defaults will be good enough until I have the cluster running, which requires the configs above and the X509 configs coming up next.

I am going to secure this as if it is a production cluster, to ensure any work I do in my local lab won’t suddenly blow up when I switch to an Azure cluster, but I’ll use self-signed certificates since it is a local lab. I’ll use a single certificate for node-to-node and server-to-client (ClusterCertificate, ServerCertificate) because I don’t plan on performing certificate rollovers. I’ll have a second certificate for clients to authenticate with when connecting (ClientCertificateThumbprints).

First, switch to a system that has the ServiceFabric SDK installed. It won’t be present on your nodes at this point.

Next copy the CertSetup.ps1 file to your desktop or another location that will allow you to edit the file (we don’t want to replace one the SDK relies on and Windows security will prevent you from saving over it in the current location).

Launch PowerShell as an Administrator, then run the altered script .\CertSetup.ps1 -Install. When it completes, edit the script to enter the second certificate subject name and run it a second time.

Opening “Manage computer certificates” from the Start menu, I can see my two certificates listed in Personal/Certificates:

To export these to pfx files, I copied the thumbprint from the details for each certificate and ran it like so:

With the PFX files produced, now we have to get them onto the nodes.

The quickest solution, since I’m on the same network, is to open up a shared folder from my desktop temporarily and download to each of the 3 nodes. From the Install the Certificates instructions, I create a script to install the certs and copy their second script to set permissions and drop those in the fileshare also.

On each node, I copy the 4 files, run the Install script, then run the Permissions script once for each Thumbprint: 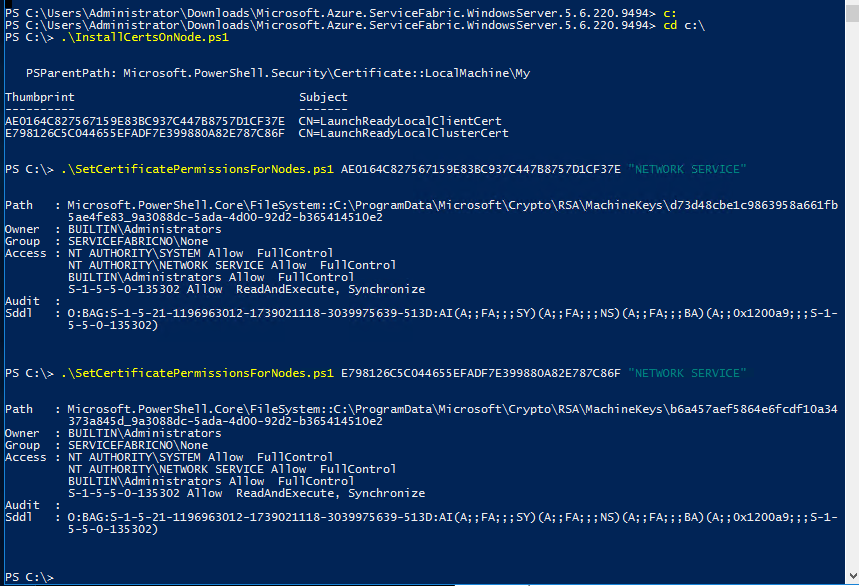 Finally, I return to SFNode0 and enter the thumbprints in the “Security” section of my cluster configuration, removing the ThumbprintSecondary properties, the ClientCertificateCommonNames property, and the ReverseProxyCertificate property that I don’t intend to use.

Note: Make sure you look at the paths in the fabricSettings section and move these to a non-OS drive if available. These are not changeable once the cluster is created. I chose to keep the defaults for this local cluster.

Before testing, there are some notable prerequisites buried in the Environment Setup:

Tip: open a powershell console to the current folder in Windows Explorer by typing “powershell” in the address bar!

Here are the errors as I work through them:

Error: “Machine ‘SFNode2’ is not reachable on port 445. Check connectivity/open ports. Error: No such host is known”

Fix: Name resolution failed to find the host on my local network, so I switched my iPAddress properties to actual IP Addresses.

SMB? Reboot all the things

Fix:
1. Open the Network Adapter properties and make sure “File and Printer Sharing for Microsoft Networks” is enabled (or netstat -ao and make sure you’re listening on 445)
2. Reboot <- It's like Windows NT all over again! (I don't know why this fixed it, but it did)

Here’s a summary of what the script is running (so you know it hasn’t gone off the rails):

This took a few minutes to run for me, but of course YMMV depending on internet speed, CPU resources, etc.

Step 5: Connect to the cluster

Connecting via web browser is easy, but the documentation assumes you are using an insecure setup. http://localhost:19080/Explorer/index.html will time out.

Use https instead and use something like Chrome instead of IE. Chrome will popup an option for you to select the Client Certificate we produced earlier, and then connect successfully: 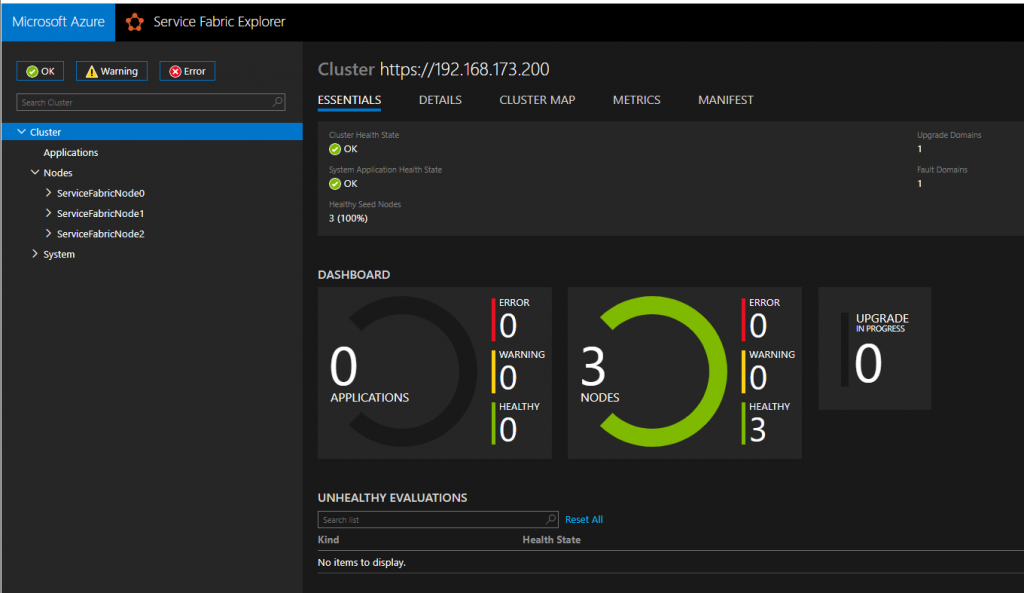 Because the certificate is self-generated, it will be treated as insecure by the browser and may require you to also go through a “no, really, I trust this certificate” routine.

Switching to Visual Studio, your ServiceFabric project should have a folder named “PublishProfiles”. Make a copy of the default “Cloud.xml” profile and rename it to “LocalCluster.xml”.

There is an example for connecting via X509 certificates in a comment in the xml file, so replace the current content with that example and edit appropriately. Use the Thumbprint from the Server certificate above (also can be found in the cluster manifest screen at https://(ip address):19080/Explorer/index.html#/tab/manifest).

Add the new profile file to the project in Visual Studio.

Right click the project and select “Publish”. In the Publish dialog, select your new Profile file from the first dropdown. The dialog will verify it can connect to the Cluster: 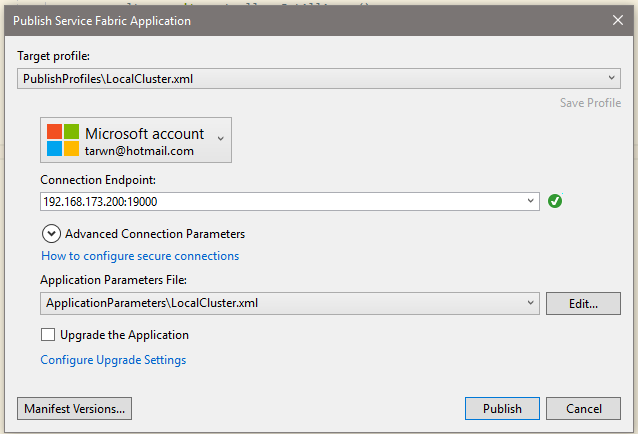 VS 2017 – Publish Package for Service Fabric

(Yes, I’m using a hotmail address, it amuses me 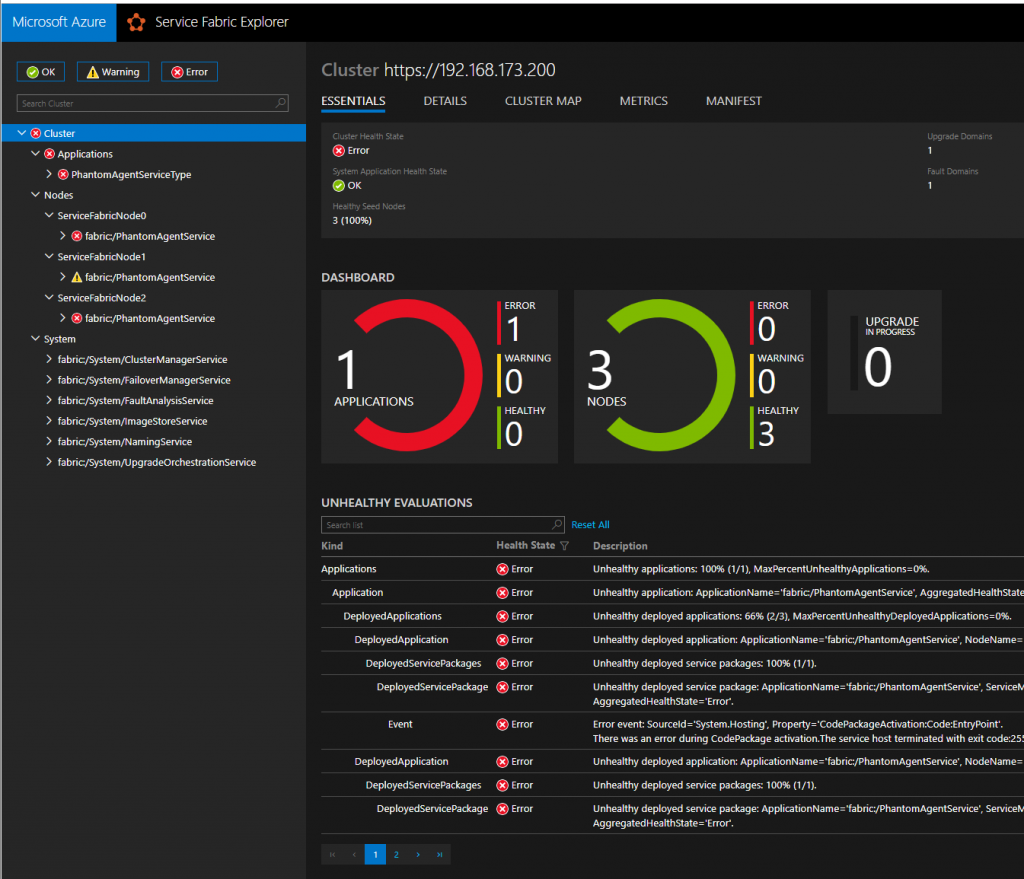 Successful deployment! Except my application is unhealthy in this case, which I will now go start to debug